Have you bought, sold, or collected these? They are often found in older homes, garages, shops, and barns. Below is some brief history. Please share your knowledge of these by adding a comment. 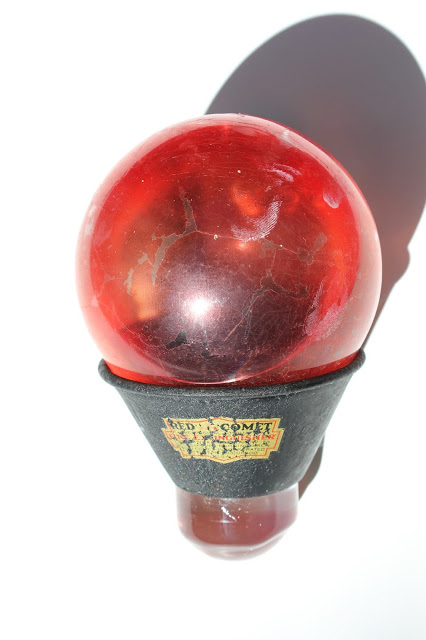 Many of the throw-able “fire grenades” were filled with CTC, a.k.a carbon tetrachloride. This liquid vaporized and inhibited the combustion process. An effective fire extinguisher.

Some early models were filled with salt water but CTC was much more effective. CTC extinguishers were withdrawn in the 1950’s due to the chemical’s toxicity. Exposure in high concentrations of CTC damages the nervous system and internal organs.

These “fire grenades” were once sold door to door by salesmen for the Red Comet Manufacturing Company. Red Comet started in Denver in 1919.

Should you break one of these and spill the liquid in a public place or building now days, you would more than likely be faced with a hazmat type of cleanup situation.

The company is still around, now out of Englewood, Colorado. The company now sells brand name portable fire extinguishers.