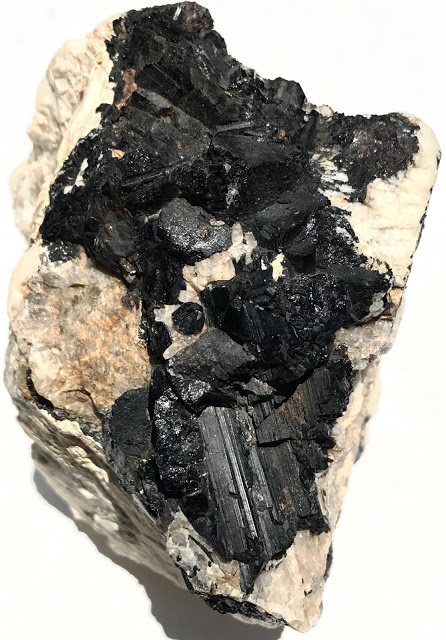 The is a mineral specimen of Black Tourmaline.

Tourmaline in general is a Crystalline Boron Silicate mineral, compounded with other elements such as aluminum, iron, lithium, magnesium, and potassium.  It is found in a variety of colors.

Black indicates it is rich in iron.  Opaque Black such as this specimen has the highest magnetic possibilities.

Classified as a semi-precious gemstone.  Also know as Schori or Dravite.

Dravite is a Brown colored form that is rich in magnesium and sodium.  Tourmaline is also found as deep green (Chromium and Vanadium Dravite)

There are reds, raspberry, pink, green, and nearly colorless.  Nearly every color imaginable.  Colored by minerals or natural radiation.

Tourmaline is one of the Metaphysical Healing stones. Shown here in its raw form.

One of the premier talisman of protection.  A Psychic shield to deflect and dispel negative energies.  A powerful grounding stone that provides a path between the Earth and Human Spirit.